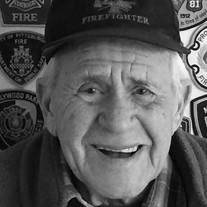 On Saturday, February 17, 2018, William R. Bender, of Avalon, age 90, passed away peacefully. He was the beloved husband of the late Rita (Thieret) Bender, beloved father of Marilyn Bender, William K. (Anne) Bender, Christine (Henry) Stephens, Joan (Larry) Kresek, Thomas J. Bender, Nancy (Dave) Roman, Loraine (late Larry) Jeter and the late Stephanie Rose Bender, loving brother to Mary Bender Henning, Paul Bender, Bernard Bender and the late Kenneth Bender. William was proud of his 17 grandchildren and 13 great-grandchildren. Bill lived in Pittsburgh all his life, mostly in Southside, Carrick and Avalon. He was a retired employee of Avalon Borough, a devout Catholic and member of the Church of the Assumption, a longtime usher, church festival volunteer and co-organizer of annual Catholic retreats. He served as a member of the Avalon Volunteer Fire Company for 60 plus years and was a 50 years plus member of the Knights of Columbus Council 1400. During his lifetime, he had many interests including gardening, woodworking, fishing, listening to country western music and collecting ball caps from his travels. As a young man, he honorably served in the Merchant Marines, performed in the St. Michael’s Passion Play, and for many years acted as Santa delivering treats to community children on Christmas Eve. He was a good sport - from tasting alligator meat to sitting high up on a Brahma bull at the National Western Stock Show. After marrying Rita and raising a family, their joy was traveling through the United States to vacation with their children, grandchildren and great grandchildren. He was known as a kind and cheerful man. He loved joking and making people smile. Bill’s life revolved around his family and his community. His life exemplified one of his favorite sayings: “what goes around comes around”. He will be missed by many. Friends received 2-4pm and 6-8pm Wednesday & Thursday at Lawrence T. Miller Funeral Home, Inc., 460 Lincoln Avenue, Bellevue. Mass of Christian Burial will be celebrated on Friday, Feb. 23, 2018 at 10am, Church of the Assumption, Bellevue. Burial will follow in St. Mary’s Cemetery, Sewickley, PA.

The family of William R. Bender created this Life Tributes page to make it easy to share your memories.

Send flowers to the Bender family.