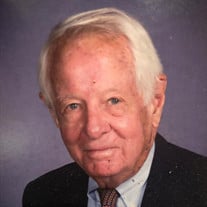 Thomas James Jackson II passed away on January 17th from pancreatic cancer. Married to his devoted wife Janet Rigdon Jackson for 60 years, revered father to Thomas James Jackson III (Erin), Julie Jackson Kolenda (Andy), and Jody Jackson Coffey (Patrick). He was a beloved and involved grandfather of six, Piper and Thomas James Jackson IV, Courtney and Jordan Kolenda, Newton and Cana Coffey. He was a resident of Ben Avon Heights and spent summers in Ocean City NJ, Janet’s childhood vacation home. Mr. Jackson loved music, mastered the piano and organ at an early age, and graduated from Princeton University, cum laude, in 1955. He then served in the US Navy aboard a destroyer for two years, followed by University of Pittsburgh Law School. He was a valued advisor to and reliable litigator for numerous regional businesses and NYSE listed companies since 1961. He practiced in many areas including environmental law, software, finance, contract litigation and effected the largest sale of an oil field in Pennsylvania history. He was Chairman of Suburban General Hospital’s Board of Directors for five years while serving from 1985 to 2004. He was legal council for Suburban Hospital during its affiliation with West Penn Hospital and the formation of Allegheny Healthcare System. He also served on the Board of Directors of the System which managed the affiliated hospitals. For fifteen years, he was President of the Allegheny Preservation Society which raises funds to restore the Calvary United Methodist Church on the North Side and its world famous Tiffany windows. He served for 25 years on the Board of Directors and as an Officer of the former Bell Federal Savings and Loan and is currently on the Advisory Board of Northwest Savings Bank. Mr. Jackson has served on the North Boros YMCA Board, the first Avonworth Community Park Board, the Old Economy Music Committee, the Ben Avon Heights Borough Council and elder of the Community Presbyterian Church of Ben Avon where he met his wife, served as organist for 17 years, and was a choir member. He was chairman of the church’s first preschool board. In 2006 he received a Community Champion Jefferson Award. Both Janet and Tom enjoy classical music, travel, skiing, and their children and grandchildren all of whom live nearby. He will be desperately missed by his family, who know his life has been a testament to family, achievement, integrity and service. A memorial service will be held at the Community Presbyterian Church in Ben Avon on Wednesday January 22 at 11:00 AM. Donations may be made to either the Community Presbyterian Church of Ben Avon, or the Pancreatic Action Network (www.pancan.org). Arrangements by Lawrence T. Miller Funeral Home, Inc.

The family of Thomas James Jackson II created this Life Tributes page to make it easy to share your memories.

Send flowers to the Jackson family.