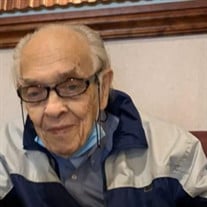 On Tuesday, December 7, 2021, Michael H. “Mickey” McCarthy, a longtime city of Pittsburgh resident, died at the age of 96. Husband of the late Barbara Anne (Malone) McCarthy; beloved father of Linda McCarthy (Gerald Kirner), Timothy McCarthy, Mercedes Maruscak (Rick Hagmaier), Elizabeth (Richard) Weingartner, Sheila (Howard) Braxton, Brendan McCarthy and the late Kevin McCarthy; loving grandfather of Damien Maruscak, Heather (Vince) Merlina, Sabrina (Nicholas) Colvard, Amy Weingartner, Gena Braxton, Julie (Mario) Ruiz, Ryan Weingartner, and Joshua Braxton; great-grandfather of Gino, Arabella, Vinnie Merlina, and Ava Colvard. Michael was one of 13 children to the late Edward and Elizabeth McCarthy, he is survived by siblings Helen Schultz and John McCarthy, and many nieces and nephews throughout the country. A veteran of the Merchant Marines, he served during WW II in the Pacific Theater. He had strong artistic talents and interests and worked at various engineering firms as a draftsman. He was an avid reader and liked to work around the house. There will be no visitation. Family and friends invited to a Mass of Christian burial to be celebrated 10:00 am at the Church of the Assumption on Tuesday, December 14, 2021. In lieu of flowers, memorial donations suggested to Church of the Assumption, 45 N. Sprague Avenue, Bellevue, PA 15202. Arrangements by Lawrence T. Miller Funeral Home, Inc., Bellevue, www.ltmillerfuneralhome.com.

The family of Michael H. "Mickey" McCarthy created this Life Tributes page to make it easy to share your memories.

Send flowers to the McCarthy family.