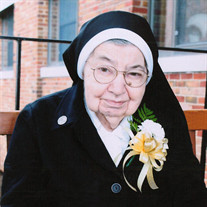 SISTER M. ANTOINETTE (IRENE) POPOVIC, OSF Sister M. Antoinette Popovic, a member of the School Sisters of St. Francis of the United States Province, in her 80th year of Religious Profession, died on January 26, 2018, at Marian Hall Home in Pittsburgh, Pa. She was 98. Sister Antoinette entered the community in 1936 from St. John Nepomucene Church in Lyndora, Pa. She professed her first vows in 1938 and, in 1944, made her Final Profession at Mount Assisi Convent in Pittsburgh, Pa. Sister earned a bachelor of science degree in education from Carlow University (formerly Mount Mercy) in Pittsburgh and a master of arts in education from Duquesne University in Pittsburgh, specializing in educating students with learning disabilities. During the 1930s, 1940s and 1950s, Sister taught the primary grades at St. Gabriel School in Pittsburgh, Pa., and at Assumption Blessed Virgin Mary School in Jersey City, N.J. Beginning in 1947, she taught the middle and upper grades in various schools in Pennsylvania and at St. Joseph School in San Antonio, Texas. For eight of those years – while teaching – she also served as principal in three schools in Pennsylvania. Sister spent 1978 through 1988 assisting residents at Marian Hall Personal Care Home at Mount Assisi Convent, followed by two years of community service. Sister had a great love for teaching and, for 20 years, devoted herself to ministering at Mount Assisi Academy Preschool. From 2010 until her death, Sister spent her time in her ministry of prayer. The daughter of the late Rudolph and Julia (Vodovic) Popovic, Sister Antoinette was preceded in death by her two brothers, Joseph and Rudolph, and two sisters, Stephanie Benson and Mary Moskala. She is survived by her religious community, her sister Margaret Prokopchak, her nieces, nephews, great nieces and great nephews and her friends from the preschool. The viewing will be at Mount Assisi Convent in Pittsburgh, Pa., from 4 to 6 p.m. on Monday, January 29, 2018, followed immediately by a vigil service. The Mass of Christian Burial will be celebrated at 1 p.m. on Tuesday, January 30, 2018, in Queen of Angels Chapel at Mount Assisi Convent. Burial will follow in St. Francis Cemetery, also at Mount Assisi. Arrangements have been made by Lawrence T. Miller Funeral Home in Bellevue, Pa. In lieu of flowers, contributions may be made to the School Sisters of St. Francis Retirement Fund, 934 Forest Avenue, Bellevue, PA 15202.

The family of Sr. M. Antoinette Popovic OSF created this Life Tributes page to make it easy to share your memories.

Send flowers to the Popovic family.