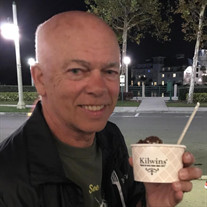 Love Lives On Born into life on September 11, 1953, in Pittsburgh, Pennsylvania, gained his angel wings on January 13th, 2022. Howard Joseph Midgley, 68, passed peacefully in his home surrounded by loved ones on January 13th, 2022. Howard was of a beloved husband, father, and grandfather. On July 25, 1975, he married the love of his life, Karen, affectionately known as Mouse. Together their love established a family that ultimately rewarded the couple with three children and seven grandchildren. Howard loved unconditionally, was always willing to lend a helping hand, never met a stranger, had the uncanny ability to succeed at every handyman project he took on, finished last at the dinner table no matter the meal or company, and without question was one of the best and longest story tellers you’ve ever meet. A skilled steamfitter and proud member of his Local 449 Union, Howard took great pride in being a mentor to all. Of all the various roles and titles Howard held throughout his incredible life, the most important role to him was being a Pap Pap to his seven delightful grandchildren. He truly loved being a grandfather. Howard’s spirit and legacy lives on through his wife Karen, his three children and their spouses; Christina and Ethan, Adrienne and Richard, and Howard Joseph Jr. (Joe) and Julie, and his seven grandchildren; Emily, Taylor, Olivia, Madelynn, Lizzie, Caleb and Ava. Preceded in death by his parents Clyde and Myrtle Midgley and sister Cathy (Midgley) Voltz and survived by brothers, Wil, Kenny and Michael Midgley. A visitation will be held Sunday 2-4 and 6-8pm at Lawrence T. Miller Funeral Home, Inc., 460 Lincoln Avenue, in Bellevue, Pennsylvania. Mass of Christian Burial will be celebrated Monday 11:00 am at the Church of the Assumption, 45 N. Sprague Avenue, in Bellevue, Pennsylvania. Howard attended The Church of the Assumption as a young boy where he served as an altar boy. In lieu of flowers, the family is asking for donations to be made to the St. Jude’s Cancer Center https://www.stjude.org/promotion/impact-giving-pm.html

The family of Howard Joseph "Jay Ray" Midgley created this Life Tributes page to make it easy to share your memories.

Send flowers to the Midgley family.