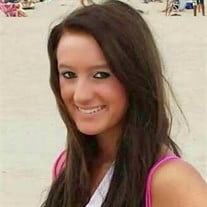 Casey Marie Schwartzmier, age 20, of Ross Township, passed away on Sunday January 15, 2017, of an accidental heroin overdose after a long brave battle with addiction. She is survived by her parents, Richard and Michelle (Waldorf) Schwartzmier, her brother Eric Schwartzmier, grandparents Mary (Planic) and the late Richard F. Schwartzmier, Jerome B. Waldorf, and many aunts, uncles and cousins. Casey never wanted to be defined only by her addiction and mistakes, she was so much more than that. She made it clear if she was to ever pass as a result of it she wanted people to know the truth with the hope that honesty about her death could help break the stigma about addicts, and get people talking about the problem of addiction that is taking away so many young lives. Casey was a beautiful, intelligent child of the suburbs who fell into its grip. It can happen to anyone. She was feisty and outspoken but would do anything for anyone and always lit up the room with her smile and sense of humor even while struggling with her demons. She loved her family deeply, wanted to adopt every animal she saw, and play with every child she came across. Casey believed strongly in second chances, maybe because she craved another chance for herself and other addicts, so she donated her life saving organs to give someone else a second chance at life. That was Casey… this amazing woman should be remembered for this and not her mistakes. Casey believed that hiding her cause of death would help no one, but if her story could help just one addict push even harder for another day of sobriety, encourage an active user to choose recovery, or shine a light on this horrible epidemic, then it would be worth coming out of the shadows. She was very open about her struggles and now is not the time to change that. This strong attitude with a fierce drive and loving beautiful heart that wanted to help other addicts even in death is one of the many things that she can be defined by, not her addiction. Casey wanted to live. She had dreams of a future career, children of her own, and fought hard all the way until the end, one day away from entering rehab, but couldn’t break the chains of this demon that's wiping out a generation. Addiction doesn’t discriminate, it will take hold and destroy anyone in its path including the families and people who love them. Addiction hides in the faces of everyday people all around us. Casey isn’t just another statistic or just “another one gone too soon”, she was a great heart with a bright future and a gift that the world lost and can never be replaced. So the best way to honor Casey is for people who read this or knew her to think twice before you judge an addict.. Friends received on Friday, January 20th from 1:00 PM to 9:00 PM at the LAWRENCE T. MILLER FUNERAL HOME, INC., 460 Lincoln Avenue, Bellevue. A Mass of Christian Burial will be held in the Incarnation of the Lord Church on Saturday, January 21st at 10:00 AM. Interment will follow in St. Nicholas Cemetery, Reserve Township. www.ltmillerfuneralhome.com

Casey Marie Schwartzmier, age 20, of Ross Township, passed away on Sunday January 15, 2017, of an accidental heroin overdose after a long brave battle with addiction. She is survived by her parents, Richard and Michelle (Waldorf) Schwartzmier,... View Obituary & Service Information

The family of Casey Marie Schwartzmier created this Life Tributes page to make it easy to share your memories.

Send flowers to the Schwartzmier family.