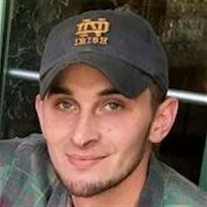 On Wednesday, September 27, 2017, Tony suddenly lost his long fought battle with addiction, leaving a hole in many loved one’s hearts, especially his 3 ½ year old daughter, Annabelle. Annabelle meant the world to Tony and brought so much meaning to his life. He fought with everything he had to overcome his disease for his little girl. He recently started a career with Kerotest and was so proud to be able to support his daughter and to give her all the things that she needed and wanted in life. In addition to his daughter, Annabelle Drgon; he is survived by his parents, Linda Drgon and Anthony Drgon, Jr. (Carol Stenson); his sister, Chelsea (Kevin) LaFalce; and by loving aunts, uncles and cousins. Tony had a love for all sports. He refereed basketball and football games alongside his father with the Greater Pittsburgh Basketball Officials Assoc. and the Alle-Kiski Football Chapter. Through all their time spent together, Tony and his father became each other’s best friend. Tony became a fan of Notre Dame as a young boy when he was inspired by the movie “Rudy.” He had a big heart and liked to be of help to others. He was the king of memes and would send them to friends and family to brighten their day. He had such a great sense of humor and let’s just say sarcasm came easy to him. He was charming and very sharp. He enjoyed a good debate; especially with his mother or father. He loved animals and in some circles he was even known as the “cat whisperer.” He was passionate about music and never was seen without his headphones. Tony, your smile lit up the world. It was the most comforting, warm, and contagious smile that anyone could be filled with and the world is darker without you. Please keep smiling on us from above. There is no more pain for you or demons to fight. We are so proud of you in every way. You are so loved and will be missed more that you’ll ever know. We love you to the moon and back. Friends will be received Monday 2-4pm and 6-8:30pm at the Lawrence T. Miller Funeral Home, Inc., 460 Lincoln Avenue, Bellevue. A Mass of Christian Burial will be celebrated 10 am, Tuesday, October 3, 2017, Church of the Assumption, 45 N. Sprague Avenue, Bellevue. In lieu of flowers, memorial donations in Tony’s memory to support his little girl’s future may be made to GoFundMe or by check.

On Wednesday, September 27, 2017, Tony suddenly lost his long fought battle with addiction, leaving a hole in many loved one&#8217;s hearts, especially his 3 ½ year old daughter, Annabelle. Annabelle meant the world to Tony and brought so much... View Obituary & Service Information

The family of Anthony Joseph Drgon III created this Life Tributes page to make it easy to share your memories.

Send flowers to the Drgon family.